After a late arrival in Seattle Wednesday night and with nothing specific planned until the Thursday evening game between the Mariners and the  LA Angels, I’d decided to turn it into a rest day.  Good idea, but I was too hyper to just sit in the room.

My solution was simple: select activities that didn’t require a lot of activity.  I did a search and found a movie theater close by the motel where I was staying that had an early afternoon showing of “Belle,” which I’d been unable to see at home.  After the movie, I’d get something to eat and then drive to the game, which had a schedule 7 p.m. start.

It turned out to be a pretty good plan.  The movie was excellent (when you can get me to cry, you’ve accomplished quite a bit), and I found a restaurant that served pseudo-Cajun cuisine–tasted fine, it just wasn’t Cajun.

Got to the stadium with nearly two hours to spare. Since the stadium was downtown, I wanted to avoid the worst of the rush-hour traffic and have plenty of time to find parking.  Attendance was light (the Mariners are currently in 4th place in their division), and the warmer, daytime weather was taking a decided chill at night.  With this in mind, I’d worn the warmest clothing I’d packed, but I wasn’t surprised it wasn’t enough for the cool evening.

The crowd that was there was enthusiastic and supportive of their team.  I wasn’t playing favorites (my family is a National League family, and I’m an Atlanta Braves fan), but I found myself pulling for the Mariners because they were so clearly the underdog.  When the cold finally forced me to leave the stadium at the seventh inning stretch, the Angels were ahead 6-3. 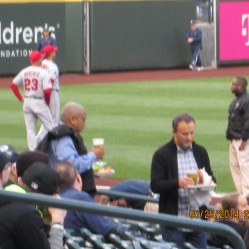 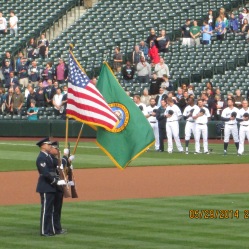 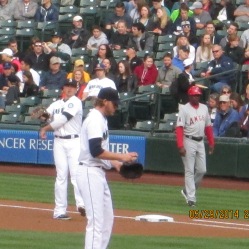 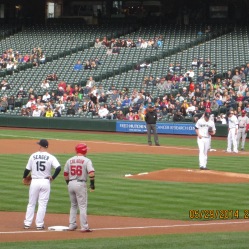 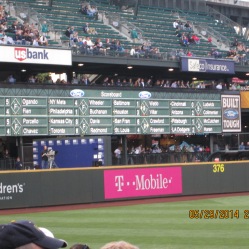 Got back to the motel and learned that the Mariners had a rally in the 9th but still lost 7-5. I wish them luck, unless they play the Braves.

We’re scheduled to leave Seattle in the morning, but specific plans are still in the air.

Since all of my driving was around town, my playlist stayed in the O’s, finishing out Otis Redding’s greatest hits.